skip to main | skip to sidebar

Can I complain for a sentence or two?
What is up with this weather!
I need summer
it makes me feel alive.

I've been staying in Cambridge since school let out.
Olivia is at HSS for 7 weeks.
And if there is a place where the sun doesn't shine it's right here.
The clouds hang so low the top half of the sky line has disappeared.
I heard the birds complaining this morning.

It's April not July

my feet are cold 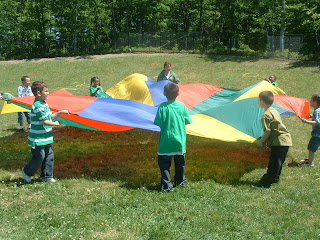 I'm sad yet happy that school's end is near.
Will I shed some tears - maybe.
I will miss these difficult children
and hope that the adults that work with them
give them what they need
to become successful people.

Yesterday we celebrated them progressing
on to their next grade.
The children preformed The Three Billy Goats Gruff
for their families. D was the smallest of the billy goats
and did a terrific job practicing all week.
He knew all his lines and was incredibly confident.
But, yesterday his mother didn't show up for the celebration.
Just before the performance he told us he wasn't going to do it.
"My mother isn't here" he said. My heart broke for him
He was crushed.
How sad. He is the child we worry about the most.

We didn't have understudies for our performance
at the last moment we asked L if he would perform the part
of the smallest billy goat and he happily agreed.
L knew all the lines and performed as though he practiced.
What a joyful surprise to all of us.

Listening to Your Inner Voice 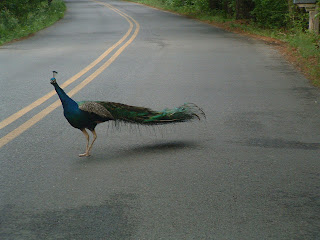 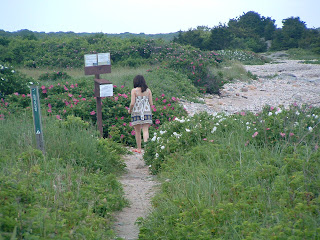 Cumulus and Stratocumulus at different heights

Yesterday afternoon Olivia and I went for a long drive. The sun was out and the sky was filled with the most beautiful cumulus fractus; cumulus humilis clouds ('fair weather clouds') so we drove out to Westport to check out the beach and country side.

As we drove towards the water the sky began to fill up with dark rain clouds and the warmth that was in the air began to chill but regardless it was beautiful. We got back into the car and proceeded on our drive which was one of those meandering drives with no destination or purpose but to see what there is to see. I came to an intersection but didn't know which way to turn but as I sat still a soft voice whispered to me to take a right turn and I will see a turkey in the road. I took the turn and told Olivia that we were going to see a turkey in the road if we went this way.

Two minutes later, in the road in front of our car, a peacock was strutting along. I told Olivia to take the camera and shoot some pictures. Peacocks are not indigenous to our area and I realize that this peacock has gone a stray - I hope it finds its way back home.

I usually listen to my inner voice for guidance and direction but this whisper was a present. 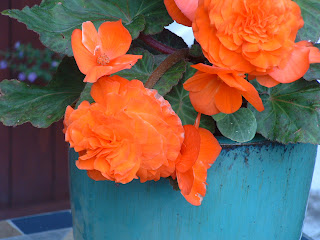 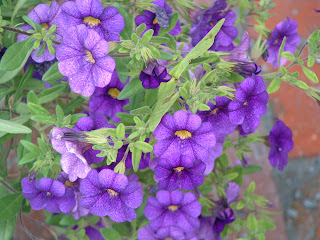 The weather isn't cooperating.
I feel as though I'm being cheated out of my favorite time of year.
Blooms are blooming and color is bursting forth regardless.
I have decided to document the burst of color
so I can remind myself that Spring is really here!

Look at the shock of color - my favorite colors

I'm sitting here typing on the computer and
I pause to blow on my cold fingers.
It's June 11 and I'm still sleeping with the down comforter.
Posted by Unknown at 6:59 PM No comments: 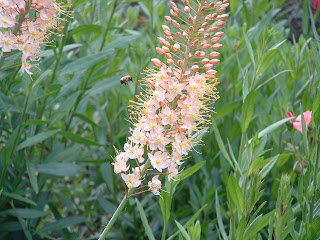 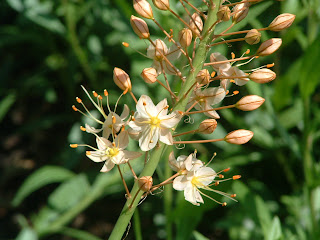 Cumulus fractus; Cumulus humilis ("fair weather clouds")
I thought that if I have nothing to say I would post a picture and say what's on my mind visually. This picture is a plant I planted in the garden about 4 or 5 years ago. It never bloomed, ever, but this year it has decided to show itself. I remember looking at it in April when the foliage began to peek through the soil and I remember thinking that these bulbs were surely duds. I had no hope of ever seeing this beautiful flower that I planted until two weeks ago when I noticed two spikes approximately 4' tall reaching for the sky. Today they finally began to open from the bottom up - are they not lovely?

There is always hope.
Posted by Unknown at 7:46 PM No comments: 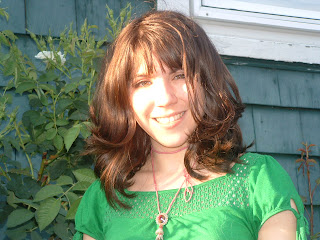 This is my youngest daughter, Olivia. Olivia is a junior in high school and she is the smartest girl. She's at the top of her class and on Thursday of last week she was awarded five prestigious academic awards for her achievements. They are:

The Harvard Book Award for excellence in scholarship and high character, combined with achievements in other fields.

MIT Network of Educators in Science and Technology 2009 Promise of the Future Award
to honor the student, who through personal initiative, has done the most to promote awareness of science or technology.

Bausch & Lomb Honorary Science Award in recognition of outstanding achievement and superior intellectual promise in the field of science.

Rensselaer Polytechnic Institute with the Rensselaer Medal Award for outstanding academic achievement in the study of mathematics and science.

CRC Press Award for Excellence in the study of AP Chemistry.

Olivia is so deserving of this recognition - she works incredibly hard and puts out high quality work. To quote the teacher who introduced her as the recipient of the MIT award,

" She is as her teachers and peers put it, "brilliant". Her teachers have said that in all their years of teaching she is the most advanced student they have taught. She is also well rounded in all aspects of her education. She is well read in all subjects. Attempts to plumb the depths of her knowledge have shown it to be boundless. Her written work is described as being impeccable and routinely displays a depth of comprehension rarely seen in other students. She has been known on more than one occasion to spontaneously join her classroom teacher in presenting a lesson. More than one teacher has stated that her knowledge on a particular subject exceeds their own. She also possesses a vast knowledge of botany, plant taxonomy and herbal remedies. All of this is work that she has done on her own. And if that is not enough, and most importantly, Olivia is recognized as being a "regular" student who interacts well with her peers. She has always been more than willing to help a classmate master a difficult topic."

We are so proud of you Olivia! We love you babe. 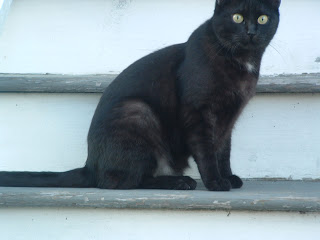 This is Stella, and she's up to no good.
For months Stella is content to be in the house sleeping, eating, playing and cuddling. However, when the spring arrives she's a different animal and she 'needs' to be outside. She becomes the Houdini of cats - one second she's in the house - the next second she's outside. She has us spinning foolishly.

Just look at that face. If you live with a cat you know that look. She has probably spotted an unsuspecting bird on the neighbors bird bath and is thinking, "ah, time to have me a little fun!" Most times I see her hunched down and creeping between the peonies in the garden. When I call her name she pokes her head up momentarily then hunkers down again and continues her stalking be it a bug or something bigger.

Last night around 9:00 we heard two cats fighting loudly. Moments before I had seen Stella in the kitchen at the food bowl and thought it couldn't be her out there fighting, but something told me that it was her fighting outside. Olivia had already rushed out the door the I followed behind, but once outside we didn't see or hear her when we called her name. I went back upstairs to check once again to see if she were in the house but she wasn't - I thought I would give it 15 or 20 minutes and check outside again and by that time she made her way into the entry and was at the bottom of the stairs. I could see the fur around her neck was in disarray with pieces sticking out here and there. I took one look at her and she mewed as if saying, I'm ready to come in. It was probably another neighborhood cat she fought with but I sometimes fear that she will come face to face with the neighborhood skunk or the opossum that make their home in our neighbors wood pile.

We are responsible cat owners and while I usually keep my animals inside there is something about Stella that needs to be outdoors. So, we allow her to be in the yard but set limits like no crossing the street ever and certainly no overnights allowed. We also intervene when we see bird stalking behavior - we scare the bird away or distract the cat, which ever is closer. If we didn't let her out we would have to endure her constant door scratching and door knob jiggling - her outdoor neediness is profound and cannot be denied.

Saint Francis look after our Stella and our Grayman outdoors - keep them safe from harm and keep the birds 12 feet from their tiny paws.
Posted by Unknown at 6:36 AM No comments: 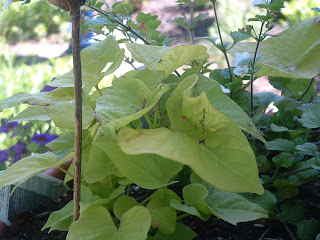 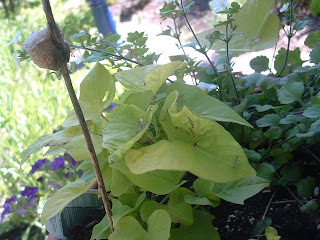 In the beginning of May while cleaning the flower beds I came across a mantis egg case on a dried daisy stem. I plucked it and stuck it in one of my flower containers and hoped that one day this spring I could witness the birth of tiny little mantids.

Low and behold today, this shiny sunny day, the mantids came out. They are very tiny and exact replicas of adult praying mantis. There were about a hundred of them in the planter amoung the foliage. There were mantids on the egg case but I can't figure out how they come out as the egg case was not split. I did notice a tiny strand of what looked like pollen hanging from it, but there was no hole or split. A mystery!

Take a look! Click on the pictures to get a closer look at the mantids. I included the egg case so you can look for some on your own. I'm going to do a little research on them as I think the praying mantis makes the egg case in the fall and the mantids are the product of last seasons frolicking. I'll let you know.

Posted by Unknown at 7:42 PM No comments: 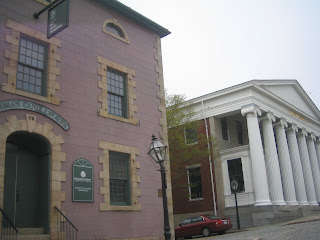 altostratus opacus, or Nimostratus, thickened, rainy form - blocking the sun or moon - this is in the historic section of New Bedford MA near the Whaling Museum

It' s the day before Memorial Day and the weather is not playing along. It's becoming irritating - I need the sun shine. The ups and downs of living in New England.
Posted by Unknown at 6:21 PM 1 comment:

You are the World

The World is the final card of the Major Arcana, and as such represents saturnian energies, time, and completion.

The World card pictures a dancer in a Yoni (sometimes made of laurel leaves). The Yoni symbolizes the great Mother, the cervix through which everything is born, and also the doorway to the next life after death. It is indicative of a complete circle. Everything is finally coming together, successfully and at last. You will get that Ph.D. you've been working for years to complete, graduate at long last, marry after a long engagement, or finish that huge project. This card is not for little ends, but for big ones, important ones, ones that come with well earned cheers and acknowledgements. Your hard work, knowledge, wisdom, patience, etc, will absolutely pay-off; you've done everything right.

What Tarot Card are You?
Take the Test to Find Out.